The red Russian hardwood trunks with silver bracketing and removable wheels may not look like much, but inside they’re packed with adventure and could revolutionize the way students learn about other countries.

These red trunks are a product of the Red Trunk Project, a project focused on teaching kids about different cultures around the world. While the trunks are literally red, the “red” also stands for “respect every difference.” 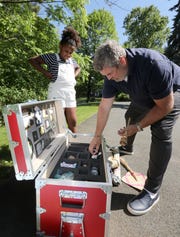 Kevin Thomsen and his daughter, Sefan, 9, at their Upper Nyack home look through a trunk filled with artifacts from Oaxaca, Mexico, part of his Red Trunk project June 4, 2019. (Photo: Peter Carr/The Journal News)

“The goal is to give kids a deep immersion into one culture and once they do that they’ll have the tools to uncode any other cultures they interact with throughout their life,” said the project’s founder, Rockland resident Kevin Thomsen.

“It’s to learn to reach out a hand instead of a fist; to build bridges, not walls.”

A producer of video games, toys, shows, ebooks and audiobooks who holds a gold record and a couple of Grammys, Thomsen is also a father of two.

“I have two adopted children, one from the Republic of Georgia, Penelope, and Sefan, from Ethiopia,” Thomsen said. “For the past 17 years, the idea of children and culture and keeping kids close to the culture of their birth has stuck with me. How do you introduce kids to a culture without going there? What’s the best way to do this?”

The answer: trunks filled with artifacts, video, virtual reality goggles and a booklet. Teaching through trunks isn’t a new concept, but Thomsen wanted to expand on the idea and hyper-focus on a whole country and its culture, as opposed to a moment in history.

“There are people who do trunk-based kinds of things,” Thomsen said, “but it’s typically one trunk filled with something like Vietnam memorabilia.”

The idea came to Thomsen during an audiobook recording session for “A Path Appears,” a book written by New York Times columnist Nicholas Kristoff and his wife, Sheryl WuDunn. The book profiles charities around the world and found a new way to measure their success.

After a conversation with actress Olivia Wilde, who was recording the book, a light bulb went off in Thomsen’s head.

“I was like ‘I want to record the stories of children from different countries around the world,”’ Thomsen said. “The differences in each other is what makes life interesting.”

The idea sat with him for a couple of years and morphed into the Red Trunk Project after his wife suggested reaching out to a friend to discuss the particulars.

“The idea of kids trading stories,” Thomsen said, “became cultural artifacts, or maybe some video, that kids can touch and feel.”

Sefan Thomsen, 9, at her Upper Nyack home, looks through a trunk filled with artifacts from Oaxaca, Mexico, part of her father’s Red Trunk project June 4, 2019. (Photo: Peter Carr/The Journal News)
Once the project launched, two years later, Thomsen reached out to Kristoff to tell him.

“He was like, ‘Oh my goodness, my wife and I were talking about how we wanted to inspire people to start their own nonprofit initiatives and you did it before ‘A Path Appears’ came out,'” Thomsen said. “He’s been a great supporter, he even mentioned us in his newsletter.”

That newsletter would get the Red Trunk Project their first major lift.

A teacher at a ballet studio on Long Island was prompted by the newsletter. According to Thomsen, the school raises money to donate to a cause every year and that year Red Trunk Project was chosen. The dancers held bake sales and movie nights, and invited non-dancers to classes. The dancers also choreographed their own performance which Thomsen was invited to. 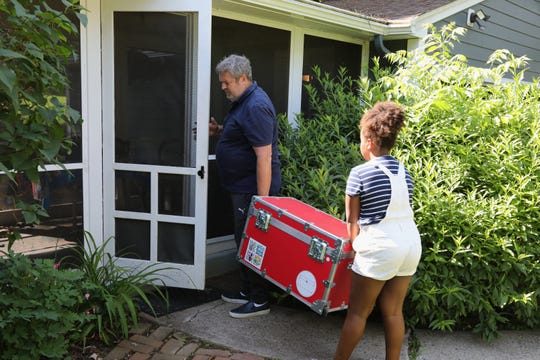 “Afterwards, I said how amazing it was and how amazing the dancing was,” Thomsen said. “I was rushed by a woman who said I needed to bring the red trunks to her school. They drove me to do the first trunk which was Oaxaca (pronounced wa-ha-ka), Mexico.”

Thomsen received a call from Samantha Black, director of social studies for the Farmingdale school district on Long Island, who asked for the red trunks to be brought to her schools. This became the beta test.

“Samantha told me ‘I’ve been teaching social studies for 25 years and that day was the best day of social studies I’ve seen in my entire career,” Thomsen said. “All the kids were engaged, especially those who are from a Mexican heritage. They were engaging and recognizing certain things that their family may have around the house.'”

Thomsen was then contacted by Dr. Gregory Brown, project coordinator for PNW BOCES in Yorktown Heights. Thomsen and BOCES are now working together to create a curriculum that will be heading to schools for the 2019-2020 school year. Some districts picked it up a bit earlier.

Michele Purpura, a third grade teacher at Brookside Elementary School in the Yorktown Central School District, had a Red Trunk visit her classroom this school year.

“For me, this was an unbelievable opportunity. Two weeks with this awesome red trunk! The Red Trunk touched upon one of my favorite themes — acceptance,” Purpura said. “I cannot explain how excited by students were during this project. They truly appreciated the artifacts, especially after viewing the videos.”

“Sheryl and I are thrilled to see what Kevin has done with the Red Trunk Project and to watch how it has grown,” Kristof said. “It’s just he kind of project that opens and nourishes young minds.”

Dr. Jill Vexler, a cultural anthropologist who has curated more than 40 exhibitions, helped decide on Oaxaca.

Thomsen approached Vexler through a mutual friend. Vexler, who spend years living in Mexico, reached out to another cultural anthropologist who was living in Mexico. With minimal conversation, they came up with identical lists for what artifacts must be in the trunks. Thomsen has made three trips to Oaxaca so far to collect the artifacts, photos and video from the lists given.

“You have to have someone who understands culture inside and out and you have to have people in the culture who will know what’s right,” Vexler said. “Anthropology for kids has to be impeccably accurate. It’s very hard to unlearn something you’ve learned wrong.” 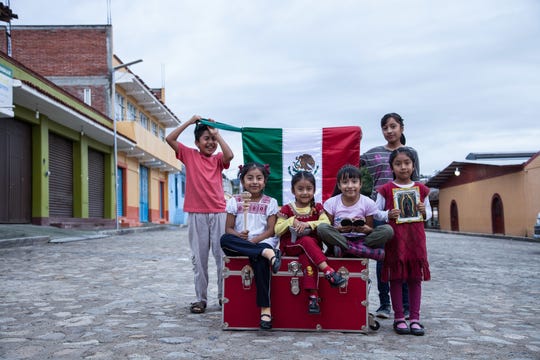 Children in Oaxaca, Mexico pose with a trunk from the Red Trunk Project. (Photo: Denisse Benitez)

How can I help?

On June 13, the Red Trunk Project is holding a fundraiser called “Red Trunk Liftoff.” There will be food, wine, a mystery raffle and an auction run by comedian Richard Kind.

What would be auctioned off to help a project such as this? How about enjoying 30 minutes of cocktail banter via Skype with “Mad Men” star Jon Hamm, who is also on the Red Trunk Project’s board of directors, or the opportunity to take a two-hour boat ride via Nyack Boat Charters, complete with a picnic provided by Mimi’s Plate? 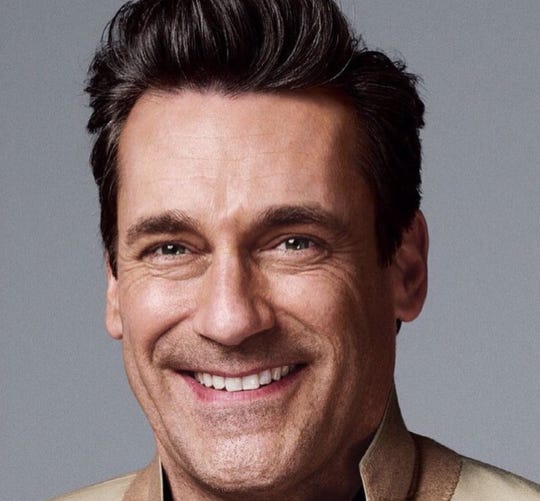 “What Kevin and his team have done with Red Trunk is provide a unique cross-cultural experiential toolset to inspire a new generation of minds to understand different cultures first hand,” Hamm said in a release. “To lead with acceptance and understanding and not fear is a valuable concept in today’s increasingly polarized and fractured conversation. I am proud to support Red Trunk and hope to make it’s reach even wider and more significant.”

“It’s to help. We’re aiming for one trunk per classroom for a two-week period,” Thomsen said. “We’re putting as many artifacts we can fit in the trunks with video and the ‘Kids of Oaxaca’ booklet. There are about 60 artifacts per trunk and we want to make hundreds of trunks to share with the world.”

Not to mention, Thomsen and his team are working on more trunks with different themes and colors.

The next Red Trunks may focus on Kenya or China. Thomsen is in talks with the Heard Museum in Phoenix, Arizona, about a Native American trunk. He is also in talks with Rockland Pride about creating a rainbow trunk which would take a look at the history of the gay civil rights movement.

The Red Trunk Project may inspire a new project focused on the environment.

Thomsen is speaking to people in Costa Rica about a Green Trunk which would focus on sustainability and climate change. He’s also discussing the idea of Blue Trunks with people in Austin, Texas. The Blue Trunks would have a focus on the ocean environment through the eyes of children in America, Canada and Mexico.

“It’s about activism,” Thomsen said. “We want kids to get active to help the environment whether on a micro or macro level. Recycling in their homes is a micro thing that can make a big difference.”

Go: Red Trunk Liftoff, OUTSIDE IN Gallery, 249 Ferdon Ave., Piermont. June 13, 6-9 p.m. $75 per person. To register for the event head to eventbrite.com/e/red-trunk-liftoff-tickets.

Leave a reply Click here to cancel the reply